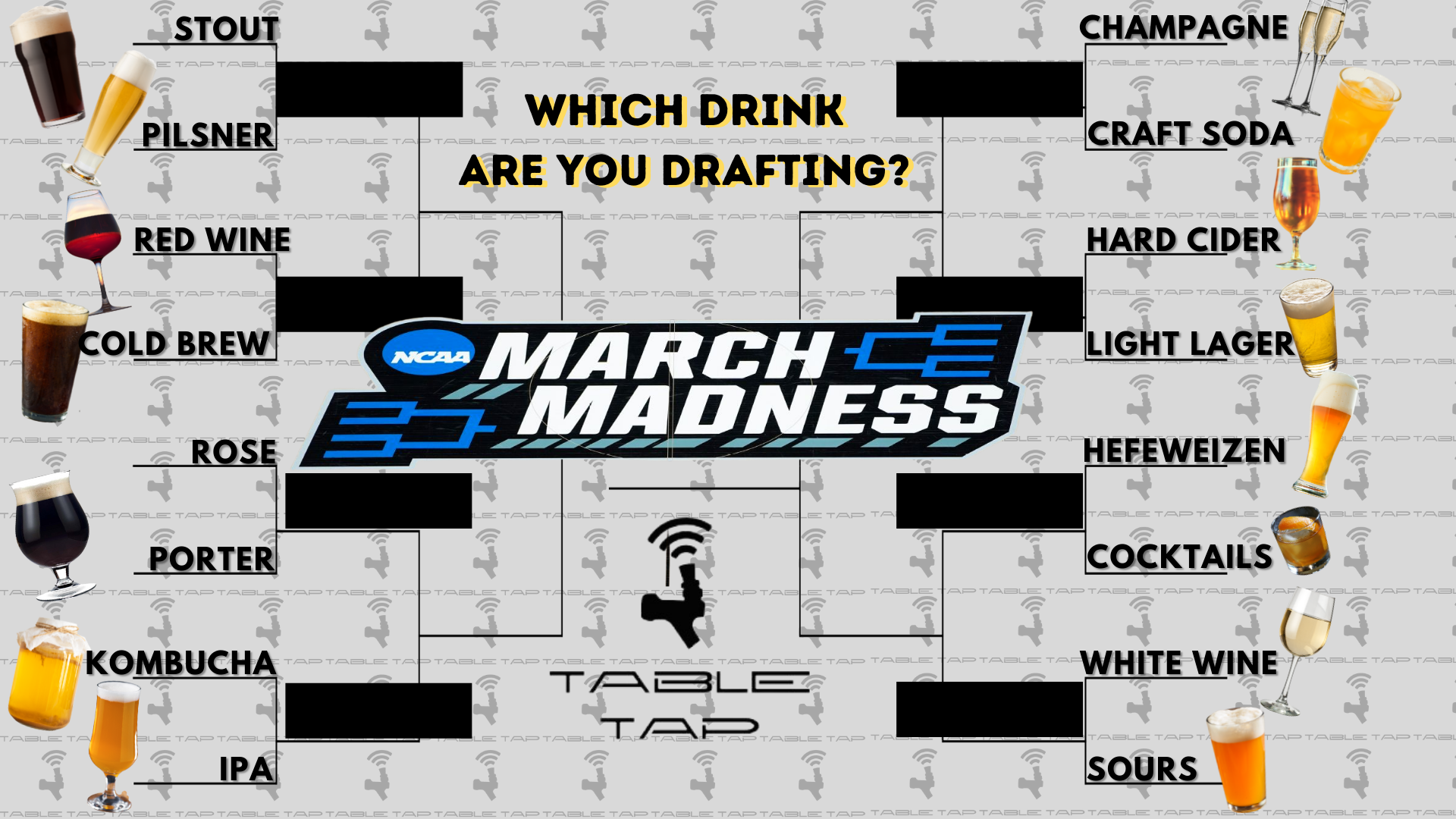 TABLE TAP HAS A CHAMPION DRAFT BEVERAGE and its name is LIGHT LAGER. The similarities between this championship and the Kansas vs UNC national championship were astounding. Both matchups between two powerhouse bluebloods. UNC jumped off to a hot start and many thought the game was over at half-time. Kind of like how those first two IPAs go down super smooth, but after that they start becoming heavier and heavier. Kansas proved to have much more endurance and experience, just as lagers prove to be lighter and a little easier to drink one after the other. For that reason, we are crowning Light Lager as the most preferred drink on tap. Cheers to Light Lager, IPAs, and any other beverage that can be poured on your own!

Two very strong and stubborn fan bases squared off against one another: One that has been around for ages and one that has recently taken the craft beer industry by storm. Two very strong and diverse rosters as well. While you can’t go wrong with a Red Wine or an IPA to wash down a hearty meal, IPA’s bread and butter is on draft. There may not be a better feeling than pulling a tap handle and watching that glass fill up with a crisp Hazy. The debate between wine vs beer in general may continue, but with IPA eliminating the last remaining wine they have proven that beer is the preferred draft beverage.

Light Lager covers the spread! With these two beers being very similar to most people, Light Lager’s margin of victory was surprising but also very impressive. Wheat beers, such as Hefeweizen, are top-fermented while lagers are bottom-fermented. However, this did not stop Light Lagers from coming out on top. With a team full of All-American brands Light Lager has been a force all tournament. With them prevailing in this matchup, it will set up a blockbuster championship round: Light Lager vs IPA.

Final Score: Light Lager 71% of votes, Hefeweizen 29% of the votes

Fine Wine vs. Fine Pilsner (@Miller Lite). The first of four beer vs wine matchups in the Elite 8. Pilsner took an early lead as their day drinking fan base probably started hammering the polls around the lunchtime hour. However, as day turned to night and fans sat down for their steak dinner, the scales started tilting towards fine wine and never readjusted. Red Wine came in as the favorite with a fanbase as old as time and one that spans across social classes. From the Upper Elite to college students slapping the bag, everyone can enjoy wine in one form or another. While Pilsner put up a good fight, Red Wine was able to squeak out the win.
Final Score: Red Wine 53% of votes, Pilsner 47% of the votes

Rose was riding high and feeling very confident after upsetting Porter in the Sweet Sixteen. This confidence though could not compete with IPA’s swagger. With a starting 5 consisting of English IPAs, New England IPAs, West Coast IPAs, East Coast IPAs, and Hazy IPAs this squad is looking like the Bulls in the 90s. As the popularity of craft beer and breweries continues to rise, IPA will be a heavy favorite moving forward in the tournament.
Final Score: IPA 58% of the votes, Rose 42% of the votes

Both of these beverages blew out their competition in the Sweet Sixteen and were looking to do the same in the Elite Eight. Light Lager, with an impressive starting lineup full of domestic light beers, was powered the whole contest by a very loyal fanbase. It is March and this fanbase proved to be even rowdier than normal. Maybe if this tournament was around New Year, champagne would have had more of a chance. Light Lager, after this commanding win over a formidable opponent, looks to keep their momentum rolling in the Final Four.
Final Score: Red Wine 23% of the votes, Pilsner 77% of the votes

After seeing the victory Red Wine had over Pilsner, many people were expecting a similar result in this matchup. However, that was not the case. The debate between red wine drinkers and white wine drinkers has always been a good one, but it seems like the Red drinkers might be the more loyal ones. Or maybe Hefeweizen is just too big of a competitor as they were able to knock White Wine out of the tournament. It would be a very interesting matchup if Red Wine and Hefeweizen can both manage to make it to the championship round.
Final Score: White Wine 42% of the votes, Hefeweizen 58% of the votes

March Madness Sweet Sixteen – Round One.

Upset Alert! The results of our first beer vs. wine matchup were a surprise to many experts. Porter came into the matchup looking a little sluggish, maybe due to its heaviness and commonly used chocolate flavors. Rose, poised to show off for its predominantly female fan base, looked a lot more fresh. Rose took an early lead and never looked back earning them a statement win.

An intriguing battle between what some might say White Collar vs. Blue Collar. Red Wine, with a fan base dating back to the 7th century BC, was the obvious favorite coming in. While Cold Brew Coffee proved to be smooth and very energetic, it could not compete with Red Wine’s sophisticated playbook and palate. A solid, but close win for Red Wine.

New kid on the block vs perennial powerhouse. Many people were excited to see how the health benefits of Kombucha would stack up against IPA’s impressive ABV and IBU one-two punch. Kombucha’s young and vibrant millennial backing propelled them to an early lead but in the end, they were no match for IPA’s strong and loyal fanbase…. A blowout victory for the IPAs.

Heavyweight against featherweight. Dark vs light. What was perceived to be a pretty even matchup proved to actually be very one-sided as Pilsner dominated. So good news to all who bet the Pilsner spread. Maybe the fans drank too many stouts during February, which is National Stout Month. As warmer weather approaches, a nice cold pilsner does sound pretty refreshing.

The biggest blowout of the Tournament. Today, boozy brunches are an almost every weekend occurrence, so no huge shocker on the overwhelming victory by Champagne. While craft soda slowly becomes a great option for non-alcoholic selections and a healthier alternative to traditional soda, it may never stand a chance against bottomless mimosas. Champagne on a self-pour tap makes it harder and harder to ever see the bottom!

Final Score: Champagne 100% of votes, Craft Soda 0% of the votes

Another first-round matchup that wasn’t expected to be very close. Hard Cider was optimistic that the recent prevalence of gluten-free menu items would be enough to fuel an upset, but boy was they mistaken. Light Lager is an absolute stacked squad composed of seasoned veterans such as Bud Light, Coors Light, Michelob Ultra, and some talented craft rookie lagers as well. They made easy work of Hard Cider and are a heavy favorite moving forward.

A nail-biter between two solid fanbases! Cocktails came out with a very versatile roster but looked a little discombobulated.  Hungover perhaps? Hefeweizen had a much stronger team full of German imports who had obviously eaten their wheaties. In a classic beer vs liquor battle, Hefeweizen was able to squeak out a win.

Final Score: Hefeweizen 56% of votes, Cocktails 44% of the votes

A nail-biter between two solid fanbases! Cocktails came out with a very versatile roster but looked a little discombobulated.  Hungover perhaps? Hefeweizen had a much stronger team full of German imports who had obviously eaten their wheaties. In a classic beer vs liquor battle, Hefeweizen was able to squeak out a win.

Final Score: Hefeweizen 56% of votes, Cocktails 44% of the votes

Probably the most flavorful matchup of the opening round. An intriguing matchup between Sweet vs. Sour, but unfortunately for sour beer lovers it’s called the SWEET Sixteen for a reason. With more of a home-field advantage, White Wine was able to prevail, setting us up for an Elite 8 full of beer vs. wine matchups. Stay tuned… 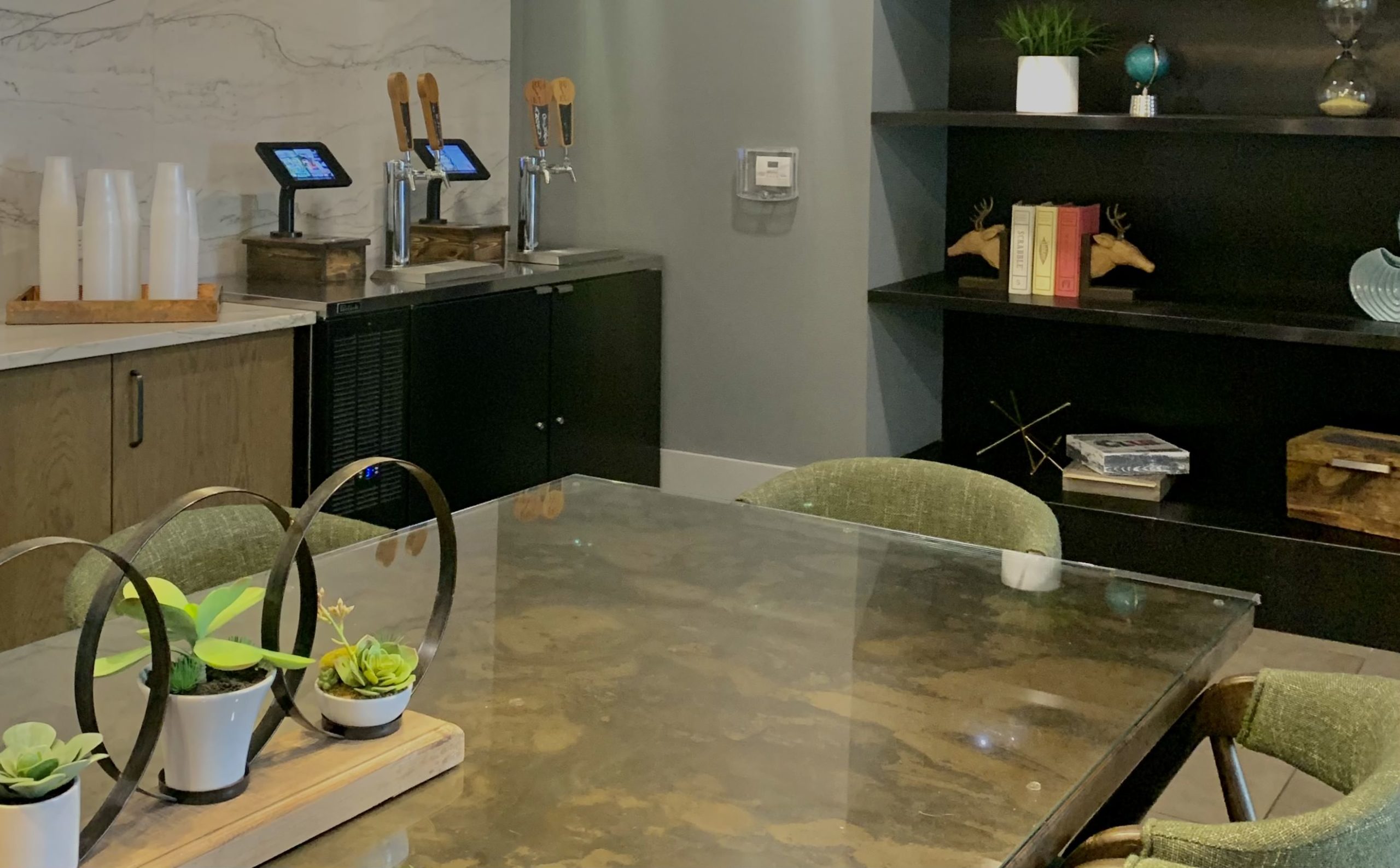 The days of offering a pool and a free coffee to set you apart as a  multi-family community are over. Now developers are including state-of-the-art… 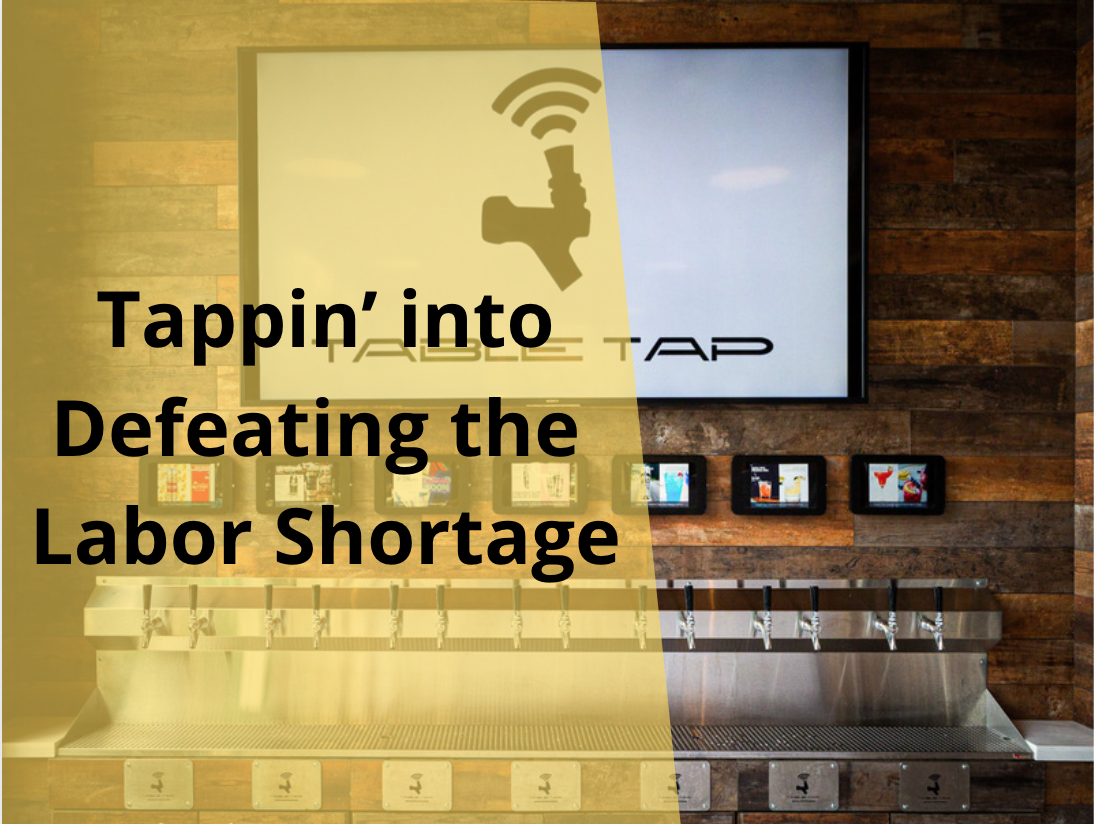 All-Inclusive Self-Pour Service It seems that in every restaurant and bar in America there is a “Help Wanted” sign. There is a national labor shortage,… 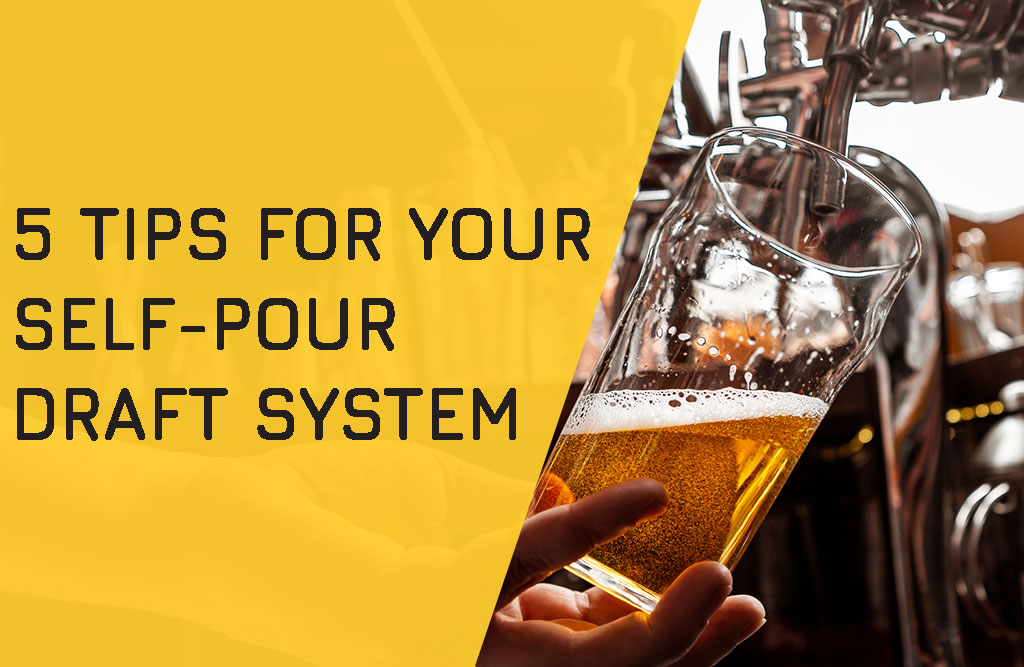 “You can have the greatest software on the planet, but if your draft system pours a foamy beer it is useless.” This is our favorite… 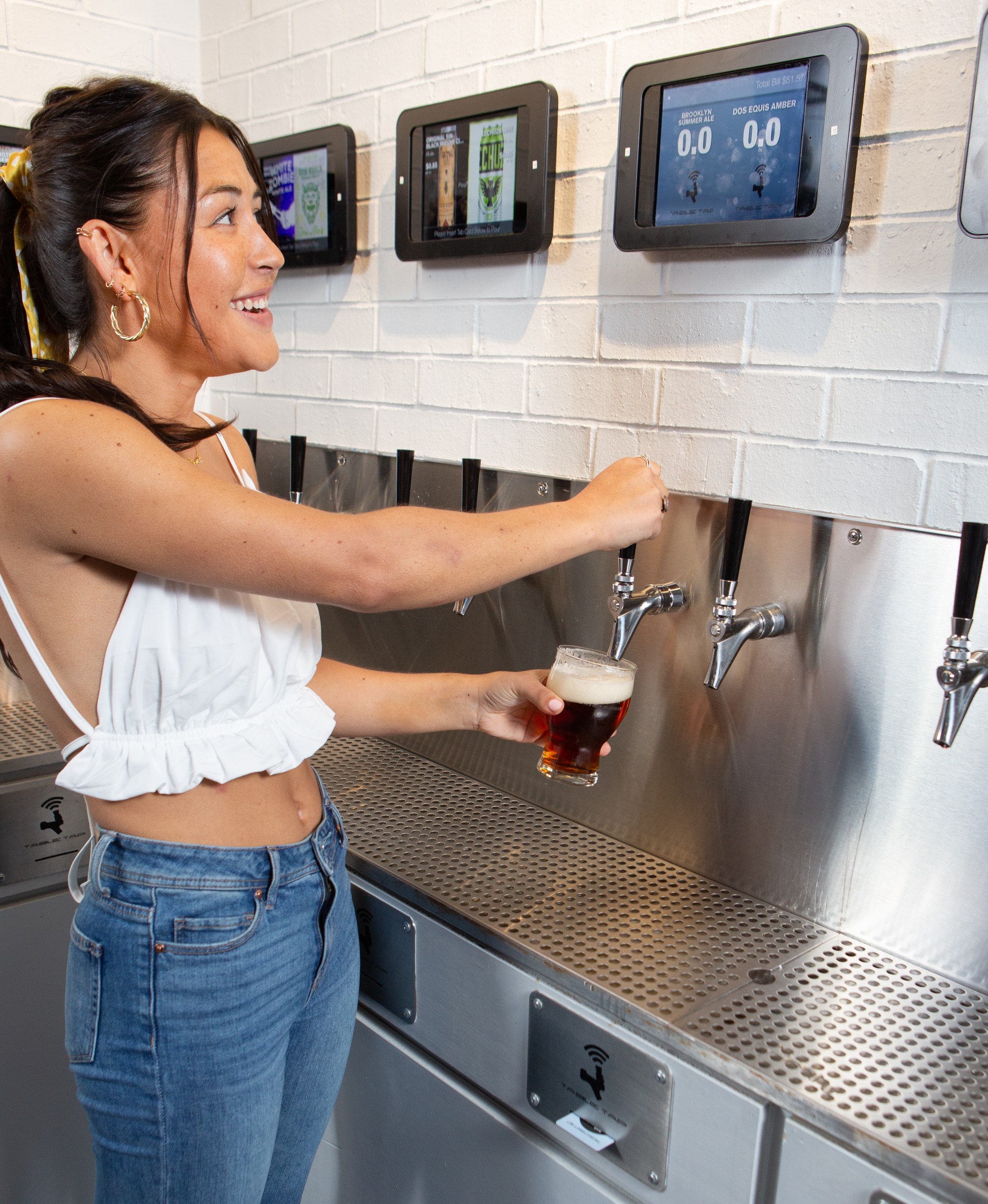 John Lennon and Paul McCartney, Batman and Robin, Mario and Luigi… All iconic duos, but no match to the greatest duo of all time: self-pour… 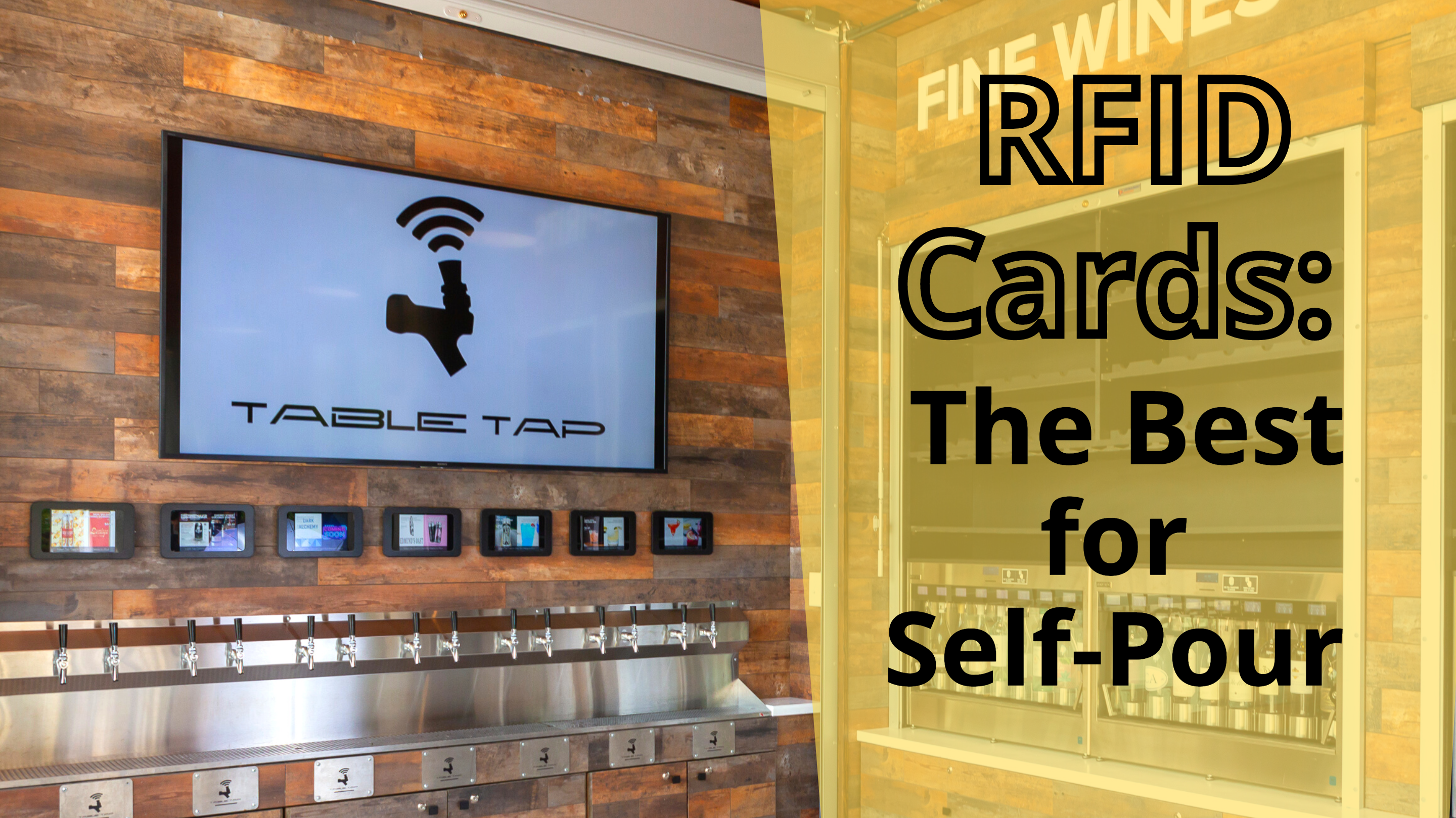 What’s the greatest invention of all time? The wheel? The light bulb? The telephone? Yeah, those are all pretty good, but let me introduce you…

What has lead us to Office Spaces? Living, working, and socializing have all changed as a result of the COVID-19 pandemic. These impacts linger, and…